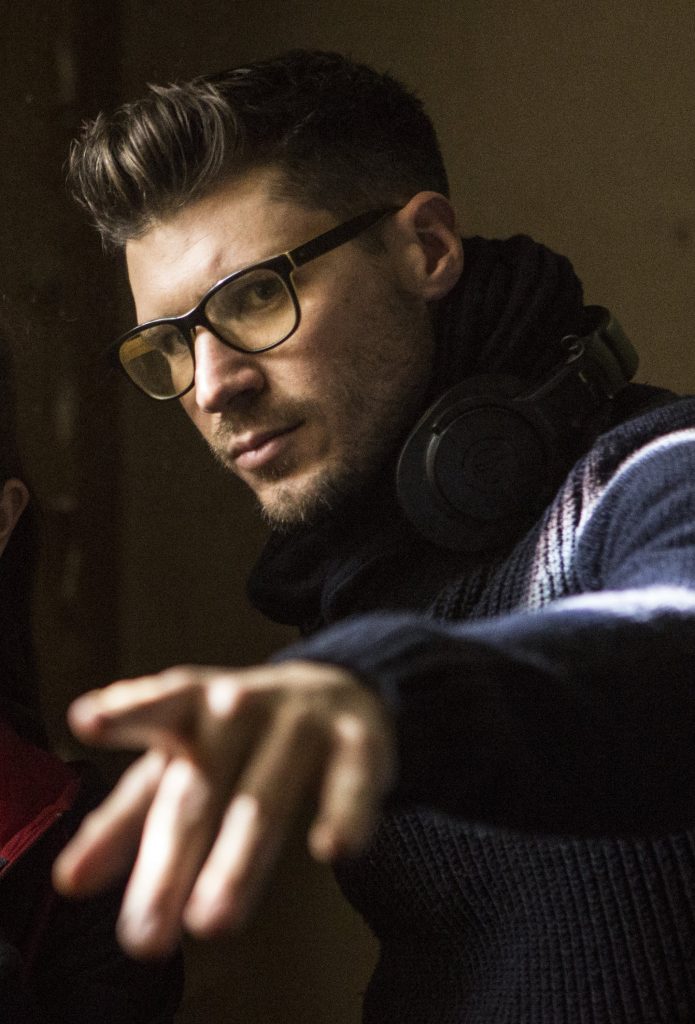 Let’s welcome director James Nunn to The Action Reloaded!! Thank you for taking the time to come chat with me James.

No worries, I have been following the website and the twitter for a while, congratulations on it all!! The site looks great

Thanks very much James, its been such a passion of mine!! I have had great support with it all.
To kick start this off I am pretty sure there are some newbies to the action world. Could you give a brief description on yourself?

My name is James and I have been very fortunate to be living my dream as a film director, its something I had been wanting to do from such a young age it was something I was passionate about and been lucky enough to be in the right place at the right time.
I suppose luck meets preparedness has allowed me to direct five feature films by this point. The first one was Tower Block, the second was Green Street 3, the third was called Eliminators and more recently I have done the Marine 5&6 with WWE Studios.
Those are my five movies.
Before that I first assistant directed on quite a few lower budget and indie movies in the UK and that was a further education after university in making contacts and meeting directors and producers and improving my knowledge.

Now we have everybody up to scratch and we are all on the same page, let’s rewind a little and go back to your first movie.. Tower Block. How did the opportunity to direct your first feature film come along?

At the time I was a first assistant director and I met a like minded producer on a movie called ‘Screwed’ the person I met was Ronnie Thompson, the writer and producer.
We were away filming in Scarborough for around eight weeks. We became very good friends and he knew I wanted to direct. We had thoughts about doing a project together and he knew someone who had access to some money and then we got access to a script penned by James Moran. He wrote Cockneys Vs Zombies which I also first assisted on. So we had a script and money and partnered up and that’s how Tower Block happened. I was very fortunate it was a dream scenario.

With the success of Tower Block did that lend a hand in you getting chosen to direct Green Street 3? Yeah, basically what happened is Tower Block did well at Film Four Frightfest – it was the closing film. It played at some other genre festivals around the world and won an award at Sitges in Spain and also played at Fantastic Fest in Austin, Texas. It did well critically, well enough for me to have a bit of a launch pad. Then Lionsgate who distributed Tower Block had a little bit of money put aside. They approached me and my co-director on Tower Block and said do you guys want to do another movie? We said ‘yeah’, although we wanted to go our separate ways, as the end game was to ultimately be directing on our own. Don’t get me wrong we are still friends and talk, we just wanted to establish ourselves individually. Lionsgate offered us both a movie each but one of them had to be Green Street 3 because they had the rights at the time and they were under review.

Well it was never meant to be a three-qual, it was meant to be a reboot called Green Street Hooligans:Underground which was its original form. There was never meant to be a number at the end, which originally made it more appealing.
Even when we attached Scott Adkins, he signed up with it under the assumption it was going to be called Green Street Hooligans:Underground and it was only after we made the movie and it was going to dvd Lionsgate decided to put the number at the end, thus making it Green Street 3. It was a disappointing rug pull. But that movie has led to a fantastic relationship with Scott Adkins who I suppose you know, he is a mind-blowing action star!! I am sure you were ecstatic to have landed Scott in Green Street 3?

Yeah, I had actually met Scott before Tower Block was fully released. He had a screener of Tower Block and he really liked it and we met. It just so happened Tower Block was playing at Fantastic Fest in Austin the same time as Universal Soldier: Day Of Reckoning which was Scott’s movie. We didn’t know we would each be in Austin and we ending up seeing each other immediately when we stepped off the Plane, so we spent the weekend together just hanging out.
We ended the trip with me saying “If I’m making Green Street, you gotta do it” and he said “If your making Green Street, I’m doing it”.

That’s so awesome, I always love a little back story. Was there any talks of a Fourth movie?

I think the idea was floated but part of the problem with sequel movies is – chances are the budget will be smaller on the next one.
On Green Street 3 we never really had a great deal of money anyway and the idea of making a part four with less money was just sort of out the question with where me and Scott wanted to go next.
I’d never say never but the window of opportunity might have passed now, if they pitched a Green Street TV Series perhaps and injected some serious money to do it I would be very interested, as I’d like to do some big TV. But I think a part four movie would just not have the budget required. I think it’s a miracle that part 3 turned out as well as it did as we made that movie for the price of say a second hand ferrari. (laughs)

After Green Street 3, you and Scott re-teamed for The Eliminators Yeah after Green Street we had been looking for something together and even now we speak and share ideas and scripts all the time. We are always looking for the next project we can do together. So once the offer for Eliminators came over from WWE Studios and the offer to re-team was on the table we put our hands up and said yeah let’s do it.
One of my main memories on that movie was Scott was quite tired, and it was an ambitious shoot – fortunately it is not reflected in the movie, but we were shooting at night all through the summer and Scott had literally flown straight back from the Boyka set and only had a day off then signed on for five weeks with me. That’s a week training and four weeks shooting. He’s such a machine. Fortunately his lack of sleep doesn’t show in the movie (laughs).
But with some of these low budget movies you just don’t get the time with you want with them.

After Eliminators you done the Marine 5 for WWE Studios? After Eliminators the WWE Studio President Michael Luisi said he liked what I done with Eliminators and really liked me and asked if we could continue making movies together. It was a case of they knew I wanted to make an original movie because I had already been down the sequel path before and they were happy with aiding that. But they were also saying look we want to do a mini Expendables and we have got the Marine Franchise which is a huge success for us, so if your interested we could maybe do a sequel to that and do an ‘original movie’ deal. So it all got set up there was nothing to lose – a 2 movie deal! I met with Mike ‘The Miz’ beforehand who plays the lead in the franchise from parts 3&4 and again like Scott he was one of the hardest working people I have met, great temperament, great attitude, and I thought it would be alot of fun.

It was shot outside of the UK right?

Yeah it was shot in Vancouver and that was a really exciting prospect for me and something slightly different, it wasn’t martial arts but I did try to incorporate some of it in the fighting, but it was more of an action movie, more in vain of where I want to be in Hollywood in the next five years.
It was great working in Canada with the cast and crew and great working with Mike ‘The Miz’ he’s became a good friend.
That is what led to Marine 6.

The Marine 6 is the latest in the Franchise soon to be released can you tell me about it? Sure, it comes out in November 2018. I got the offer to continue the story with Mike and do a few more interesting bits with his character, I also got to bring it to London this time so I could reunite with some my crew that I love working with over here and also I got Shawn Michaels ‘The Heartbreak Kid’ an absolute legend in the WWE. It was a no-brainer really and we shot that in December 2017 in London, it was a very cold December and we are cheating the whole movie for Portland, Oregon. The cast took the worst of it as they were running around in London in t-shirts trying to sell it as the autumn or the fall in America where as realistically it was snowing! I felt bad for them (laughs). And I actually kept quoting a phrase Scott Adkins taught me on Green Street 3, ‘pain is temporary, but film is forever’ (laughs) we say it all the time on tough shoots.
I am pumped about the latest movie, there is laughs, Drama, Thriller, Action – there is a real mix, its a fun movie. Loads of people think Marine five is the best in the franchise but I think we might have outdone part five with this one, so I’m excited to see the audiences reaction.

I don’t actually know if there will be another sequel because that’s determined by WWE Studios / Sony International,
and kinda dependent on sales and how this one does and if they can get the cast back, etc, etc. I would never say never as it’s a very successful franchise for WWE so it would be my best guess that they’re going to continue making Marine movies, but I can’t for sure tell you if they are or aren’t.

After the Marine 6, is there any other projects on the horizon?

Ehm yeah I have a few things I have been looking at recently, some personal projects, and me and WWE Studios still have a good relationship so we’re talking about an original next as opposed to another Marine movie. Exciting things to come.